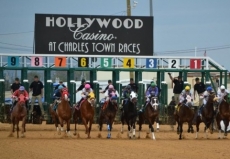 On Saturday at Charles Town, the featured race is the $50,000 Fancy Buckles Stakes. Restricted to fillies and mares bred in West Virginia, the four and a half furlong contest has drawn a field of eight.

Get the Sensation tops the field as the morning line favorite at odds of 5-2 for trainer Crystal Pickett. A three-year-old daughter of Not For Love, she has won three of her five starts and comes into this race off of a three-race win streak. She earned the first stakes victory of her career last time out against fellow state-bred competition as the favorite and is scheduled to break from post position five under jockey Stevica Djuric.

Second choice at 3-1 on the morning line is Miss Mountineer, a homebred for trainer Stephen Reggetts. A four-year-old daughter of Lion Hearted, she has been on the board in six of her eight starts and is a three-time winner. She will be making her first start of the year and stepping back up to stakes company after a runner-up effort against allowance competition in December. Ramon Maldonado will be in the irons and they will break from post seven.

Also in the field at morning line odds of 4-1 is Kluvyabye, one of two horses in the race trained by Michael Atkins who also bred and owns this five-year-old mare. A dark bay daughter of Windsor Castle, she is a seven-time winner and will be trying to earn the first black-type victory of her career. She has hit the board once from three starts this year and was last seen finishing fourth against stakes company at Charles Town. Dale Whittaker will be aboard from post three.