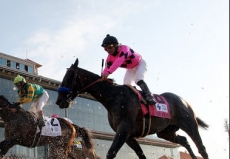 A field of seven juvenile fillies will contest the 7th running of the $50,000 Letellier Memorial December 19 at Fair Grounds – the first of five stakes races on the card.

Above Fashion is the 5/2 morning line favorite in the six furlong event, but will need to rebound after being soundly defeated in her last two starts. The daughter of Paddy O’Prado finished third last out in the Grade 3 Delta Princess Stakes November 21 at Delta Downs, but was beaten 11 lengths. Prior to that outing, Above Fashion managed to finish second in a listed stakes event October 23 at Delta, but was beaten 7 lengths. The Ron Faucheux trainee has recorded two wins in seven starts.

Speightstastic (7/2) rates a strong look despite being winless in three starts. The William Brett Calhoun trainee was likely a victim of facing above average competition while finishing second in each of her three starts – all at Churchill Downs. In her first two efforts, Speightstastic was beaten by next-out winners before coughing up a clear lead to a first-time starter that was purchased for over a million dollars as a yearling in her last start. Calhoun entered the filly December 13 in a maiden special weight event at Fair Grounds, but confidently scratched in favor of this more lucrative spot.

Princess Kennedy (3/1) will be making her first start since October, when she was last seen finishing ninth of ten in the Grade 1 Alcibiades October 2 at Keeneland. This is surely a softer spot and trainer Michael Stidham connects at a 23% clip with runners returning from similar layoffs.