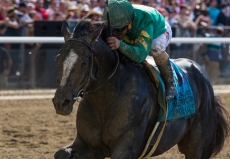 The field is set for the $5 million Breeders’ Cup Classic which will be held this year for the first time at Keeneland. The Grade 1 event, run at a mile and a quarter, drew a field of ten but scratched down to nine when champion Beholder was withdrawn.

American Pharoah has been tabbed as the morning line favorite at odds of 6-5 for trainer Bob Baffert. Owned and bred by Zayat Stables, the three-year-old son of Pioneerof the Nile made history in June when he won the Belmont Stakes and became the first horse since 1978 to sweep the Triple Crown. Since then, he won the Haskell Invitational (G1) and suffered his first defeat of the year in the Travers Stakes (G1). Regular rider Victor Espinoza will be aboard and they will break from post position four.

Honor Code the main danger off the pace

Second choice had been the mare, Beholder, but that now defaults to Honor Code at 6-1 on the morning line. Trained by Claude McGaughey, III, the dark bay colt is from the final crop of prolific stallion A.P. Indy and has won six of his nine starts. After back to back Grade 1 wins, he finished a disappointing third in the Kelso Handicap (G2) at Belmont Park last time out. Javier Castellano will be aboard and they are scheduled to break from post position nine.

Also in the field at morning line odds of 6-1 is Tonalist for trainer Christophe Clement. A four-year-old son of Tapit, he denied California Chrome the Triple Crown in the Belmont Stakes (G1) last year and has won a total of six of his fourteen starts. He won the Jockey Club Gold Cup (G1) for the second consecutive year last time out and has been on the board in all five starts this year. John Velazquez will be back in the irons and they will break from the inside post.