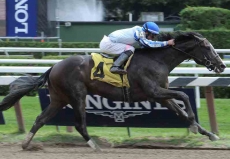 On Saturday at Gulfstream Park, the featured race is the 73rd edition of the $400,000 Fountain of Youth Stakes. Scheduled to be run at a mile and a sixteenth on the main track, the Grade 2 race has drawn a field of eight three-year-old colts and geldings in search of points towards the Kentucky Derby.

The consistent Upstart headlines the field as the morning line favorite at odds of 8-5 for trainer Rick Violette, Jr. The New York-bred son of Flatter, purchased for $130,000 as a yearling, has been on the board in all five of his starts and has three wins to his credit. He jumped onto the Triple Crown scene with an authoritative score in the Holy Bull Stakes (G2) at Gulfstream Park last time out. Jose Ortiz will be aboard from post position seven.

Frosted seeking a rematch with Upstart

Second choice at 5-2 on the morning line is Frosted, the runner-up in the Holy Bull (G2) last time out. Trained by Kiaran McLaughlin, the gray son of Tapit will get an equipment change and wear blinkers for the first time. He has been on the board in all five career starts and is trying to earn the second victory of his career. He has been training sharply since his last start and will have regular rider Irad Ortiz, Jr. aboard from post position six.

Also in the field at morning line odds of 4-1 is Itsaknockout who will be making his stakes debut for trainer Todd Pletcher. A bay son of Lemon Drop Kid purchased for $350,000 as a yearling, he is undefeated from two career starts and was last seen winning an optional claiming race at Gulfstream Park. He has been training steadily since then and will have regular rider Luis Saez in the irons from post position five.