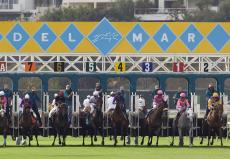 This Sunday at Del Mar is the 41st running of the Eddie Read Stakes, a Grade 1 race with a purse of $300,000. The mile and an eighth contest will be run on the turf and has drawn a field of six colts and geldings.

Installed as the favorite at 8-5 on the morning line is the formidable Summer Front, a five-year-old son of War Front trained by Christophe Clement. Popular East Coast rider “Jersey” Joe Bravo has been the regular jockey for this horse and will be in the irons. Summer Front was last seen finishing second behind Obviously in the Shoemaker Mile (G1) at Santa Anita. He will break from post position two.

Second choice at 2-1 is Tom’s Tribute, a four-year-old chestnut son of Lion Heart trained by James Cassidy. Mike Smith will be back aboard and was in the irons for his most recent victory two races back in the Thunder Road Stakes. He finished in a dead heat for third in the Shoemaker Mile (G1) in his last start and is looking for his first graded stakes victory. He will break from the outside in the field of six.

Cogito will be making his first start in just under a year and has been tabbed as a longshot at 15-1. The son of Giant’s Causeway has gone winless since 2012 and has yet to hit the board from four United States starts after some initial success in Great Britain. He will be making his first start under the care of Edward Freeman and will have Mario Gutierrez aboard for Reddam Racing, LLC.