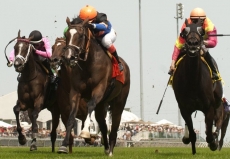 On Sunday at Woodbine, the stakes action will continue with $300,000 Canadian Stakes. Restricted to fillies and mares, the Grade 2 event will be contested at a mile and an eighth on the turf and has drawn a field of eleven.

Strut the Course tops the wide open field as the morning line favorite at odds of 5-2 for trainer Barbara Minshall. A homebred for owner John Unger, the five-year-old daughter of Strut the Stage was Canada’s champion older mare last year has won eight of her twenty starts and is a multiple graded stakes winner.  She has one win from three starts this year and was second in the Ontario Matron Stakes (G3) last time out. Luis Contreras will be aboard from post position four.

Hoop of Colour returning off of a layoff

Second choice at morning line odds of 4-1 is Hoop of Colour for trainer Graham Motion. A four-year-old daughter of Distorted Humor bred and owned by Flaxman Holdings, she has won four of her six starts and is undefeated from two North American outings. She won the Santa Ana Stakes (G2) at Santa Anita last time out and will be making her first start off of a six month break. Drayden Van Dyke will be aboard and they will break from post position three.

Uchenna (IRE) trying for two in a row

Also in the field at morning line odds of 6-1 is Uchenna (IRE) for trainer Roger Attfield. A four-year-old daughter of Fastnet Rock (AUS), she has won four of her thirteen starts and last time out pulled the minor upset over the heavily favored Strut the Course to earn her first graded stakes victory in the Ontario Matron Stakes (G3). Alan Garcia will be back in the irons and they are scheduled to break from post position seven.