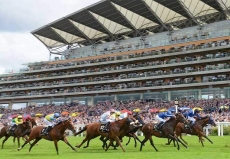 The Royal Ascot meeting for 2020 begins on June 16, with five straight days of racing action including eight Group 1 races and 30 stakes overall. There are two Group 1 races on Tuesday, followed by the St James Palace Stakes, the Diamond Jubilee, the Gold Cup, the Commonwealth Cup, and the Coronation Stakes.

MyBookie, GTBets, and Bovada have all the action offering great odds and promotions on the 2020 Royal Ascot.

Tips and Bets for Ascot

When wagering on Royal Ascot racing, bettors must keep in mind which jockeys and trainers do best. Aidan O’Brien, John Gosden, Wesley Ward, and Sir Michael Stoute are among the top trainers, and jockeys include Ryan Moore, Oisin Murphy, James Doyle, and Andrea Atzeni.

On Tuesday, the Group 1 races at the Queen Anne for milers and the King’s Stand Stakes for sprinters. Circus Maximus will be very tough to beat in the Queen Anne but faces 15 rivals set to do battle with him. Mustashry and Mohaather are dangerous in the spot, as is Terebellum, but they may be running for second.

In the King’s Stand, Battaash is the most popular runner. Charles Hills trains the horse, who seeks revenge after finishing second in this race last year. James Doyle will ride Equilateral who is currently 7-1 and could surprise.

On Wednesday, the Prince of Wales’s Stakes is the only Group 1. It has a field of 11, with Barney Roy and Japan locking heads. Those are the top two, but outside of them Addeybb has a chance for William Haggas; he has won two in a row in Australia against Group 1 company.

The Thursday feature is the Gold Cup (G1), where defending champion Stradivarius is back again but is on a two-race losing streak after going unbeaten for two years. Cross Counter, Prince of Arran, and Technician could all have a shot if Stradivarius is not the same horse.

On Friday, the Commonwealth Cup (G1) has a big field of 20 pre-entered. Mums Tipple was a popular runner from 2019 and Kimari comes in from the United States for Wesley Ward after winning at Keeneland, Saratoga, and Oaklawn Park in the last year. If wheeled back off a June 12 race, Lope Y Fernandez would be worth considering.

In addition to O’Brien, Gosden, Ward, and Stoute, leading trainers including Charlie Appleby, William Haggas, Roger Varian, and Mark Johnston. Betting on these trainers to finish in the top three with their horses is virtually always safe because they are among the leaders in the world and their biggest competition comes from each other.

O’Brien’s best horses have been numerous; he trained Giant’s Causeway, High Chaparral, Galileo, Australia, Camelot, and Rip Van Winkle amongst others. He has won the Group 1 St. James’s Palace Stakes at the Royal Ascot meeting a staggering eight times.

William Haggas won the Epsom Derby with Shaamit in 1996. He is a worldwide trainer with Group 1 wins in Australia, Italy, Germany, Ireland, and France as well as England. Dancing Rain took the Epsom Oaks in 2011.

Roger Varian won the 2018 E. P. Taylor Stakes with Sheikha Reika and took the Coronation Cup in 2016 and 2019. His top runner Postponed was the winner of the Dubai Sheema Classic in 2016.

Sir Michael Stoute trained dual Breeders’ Cup Turf winner Conduit and numerous English champions. He has won the Coronation Stakes four times, the Epsom Derby five times, the Diamond Jubilee and King’s Stand once each, and the Prince of Wales’s Stakes four times. He won the Queen Anne Stakes three years in a row from 2000 through 2002.

Wesley Ward is best known for his precocious juvenile runners. He was a champion jockey in 1984 and elected to the Washington Racing Hall of Fame in 2015. He became the first United States-based trainer to win at Royal Ascot in 2009 with Strike the Tiger.

As for jockeys, Ryan Moore has been the top jockey at Royal Ascot for nearly a decade. His fastest mounts include Conduit, Magician, Highland Reel, Gleneagles, Found, Minding, and Love, who took the 1000 Guineas in 2020.

Popular Italian jockey Frankie Dettori is always special to watch and is the regular rider of 2020 Royal Ascot starter Stradivarius. Other mounts have included Golden Horn, Sinspiel, Swain, and Daylami.

James Doyle won both the King’s Stand and Diamond Jubilee in 2019 aboard Blue Point. Born in 1988, he has ridden the likes of Kingman, Poet’s Word, and the super mare Sea of Class.

The famous festival of Royal Ascot has been around for hundreds of years, with the five-day meeting attended by the Royal family of England coming to prominence in 1911. Formal dress is required for the event, including headpieces, top hats, and coattails, but the dress code has been relaxed for 2020 running. No owners or spectators will be allowed, and Queen Elizabeth II is not attending the event. She is usually present every single day of the meet, and one of the biggest wagers of the day is on the color of her outfit.

The racing year is not complete without wagering on Royal Ascot, the most prominent meeting in the United Kingdom all year.

See below the top racebooks where you can wager online and choose the best one for you: