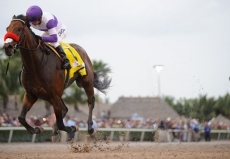 With this year's three year-old crop leaving plenty to be desired in terms of fast speed figures - none of the major final preps produced Beyer Speed Figures over 100 with the exception of Exaggerator's sloppy track score in the Santa Anita Derby - the conditions seem ripe to begin searching for a longshot in the Kentucky Derby.

Bettors will surely key on the undefeated Nyquist who has an impeccable resume: 8 wins in 8 starts, reigning 2 year-old male champion, and four grade 1 victories over three different tracks. The only chink in Nyquits' armor, however, is that the Doug O'Neill trainee hasn't run particularly fast. In winning his final prep, the Grade 1 Florida Derby, Nyquist earned a paltry 94 Beyer Speed Figure. Maybe the star colt is only running as fast as he needs to, but maybe, just maybe, he's a vulnerable favorite. The problem, of course, is everyone else is just as slow.

So where does that leave bettors search for a logical longshot in a 20-horse field of less-than-swift horses? If Nyquist is the clear-cut favorite (and he will be), why not start with an improving horse that ran second in the Florida Derby after giving Nyqust a brief scare in the stretch? Majesto definitely benefitted from a ground-saving trip when finishing several lengths behind Nyquist in the Florida Derby, but the colt is rapidly improving and well-bred for the mile and a quarter trip of the Kentucky Derby. Just a maiden winner, Majesto did not find the winner's cirlce until his fifth career start, but certainly seems to be figuring things out at the right time.

It's also worth noting who Majesto beat while winning a February 27 maiden special weight race at Gulstream in his lone career win. Dig Deep ran second in that contest before wheeling back to win a maiden special race and going on to win the Robert Hilton Memorial Stakes in impressive fashion April 23 at Charles Town. It will be interesting to see how Majesto works in the weeks leading up to the Kentucky Derby. At the very least, Majesto could be an interesting play to spice up exotic bets on the first Saturday in May at generous odds.