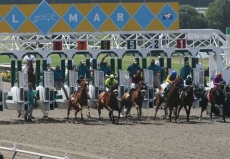 On Wednesday at Del Mar, the featured race is the $200,000 Sorrento Stakes. A Grade 2 event for two-year-old fillies, the race will be contested at six and a half furlongs on the main track and has drawn a field of eight.

Bob Baffert will saddle Pretty N Cool who has been tabbed as the morning line favorite at 8-5 odds. A gray daughter of Scat Daddy, she was purchased for $160,000 as a yearling and will be making her stakes debut. She broke her maiden at first asking last time out in front-running fashion by 4 ½ lengths as the even-money favorite at Del Mar in July. Martin Garcia will be back aboard and they will break from post position seven.

Second choice at 5-2 on the morning line is Uptown Twirl for trainer John Sadler. A bay daughter of Twirling Candy, she was a $630,000 purchase in March. Sent off as the heavy favorite in her career debut at Santa Anita in June, she defeated seven rivals in a game effort to win by half a length. Victor Espinoza, her pilot last time out, will be back in the irons from post position six.

Also in the field at morning line odds of 10-1 is Gomo for trainer Doug O’Neill. A bay filly from the first crop of champion Uncle Mo, she was third in her career debut and followed that up with a maiden-breaking score as the favorite. She set the pace and drew off by 5 ¼ lengths under Mario Guttierez. He will be aboard for Reddam Racing and they are scheduled to break from post two.