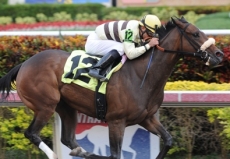 On Saturday at Gulfstream Park, the featured race is the $200,000 Royal Delta Stakes. A Grade 2 race named in honor of the champion mare, the mile and a sixteenth contest has drawn a field of seven fillies and mares.

House Rules has been tabbed as the morning line favorite at 9-5 for trainer James Jerkens. A four-year-old daughter of Distorted Humor, she comes into this race off of back to back wins against stakes competition. With five wins from fourteen starts, she was last seen winning the Rampart (G3) and has been first or second in six of her seven starts at Gulfstream. Javier Castellano has the mount from post position six.

Second choice at 3-1 on the morning line is Molly Morgan for trainer Dale Romans. A six-year-old daughter of Ghostzapper, the seven-time winner has been on the shelf since finishing third in the Fall City Handicap (G2) and has been training steadily in Florida for her first start of the year. Regular rider Corey Lanerie will be aboard and they will break from post position seven.

Also in the field at morning line odds of 7-2 is Sheer Drama for trainer David Fawkes. A five-year-old daughter of Burning Roma, she has won three of her fourteen career starts and will be trying to earn the first graded stakes win of her career. She was third in the Rampart (G3) at double-digit odds and has had a bullet workout since then. Joe Bravo will be aboard from post position three.