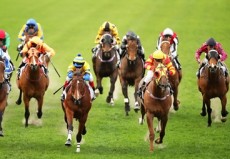 The $200,000 Peebles Stakes is the featured race of the October 13 Columbus Day holiday card at Belmont Park with eleven three year-old fillies lined up to go a mile on the grass.

Turf ace Chad Brown trains the 3/1 morning line favorite in Kenzadargen who is coming off back-to-back victories against allowance foes after multiple group 2 and group 3 placings in her native France. Kenzadargen’s successful transition to American racing has been a breakthrough of sorts considering her penchant for running second and third overseas albeit against better competition than she has faced so far in the U.S.  With Joel Rosario in the irons, Kenzadargen is the one to beat.

Another foreign runner who figures to make an impact in the Peebles is the Irish-bred Indian Rainbow (4/1 ML) who is making her North American debut for trainer Christophe Clement.  Indian Rainbow has two wins in eight lifetime starts – all of which were made in Germany –including a second place finish at the group 2 level and another second place finish in a group 3 race.  Jocky Irad Ortiz gets the call on Indian Rainbow who will race on Lasix for the first time.

Sandiva (5/1) is yet another contender with a European racing background. Trained by Todd Pletcher, Sandiva will make her second U.S. start after a seventh place finish in the Grade 2 San Clemente Handicap at Del Mar in July.  Sandiva raced in France and England in each of her first eight starts.