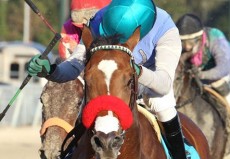 On Saturday at Delta Downs, two-year-olds will take center stage in the $200,000 Jean Lafitte Stakes. The one mile contest has drawn a field of eight colts and geldings.

Topping the field at morning line odds of 5-2 is Incremental, a juvenile son of Flatter trained by Albert Stall. Purchased for $125,000 as a yearling, the dark bay colt is still a maiden from three starts. He was last seen finishing fourth, beaten a length, against maiden company at Keeneland last time out. His best career effort came two starts back when he finished third on the turf at Saratoga. Colby Hernandez will be aboard and they will break from post four.C

Second choice at 5-2 on the morning line is Control Stake for trainer Tom Amoss. Bred in Florida and purchased for $85,000 as a yearling, the bay son of Discreetly Mine was second in his career debut at Indiana Grand and followed that up with a victory in his second outing. He will be stretching out to two-turns for the first time and will break from post five under Gerard Melancon. Since his maiden victory, he has had a bullet workout at Churchill Downs.

Big Big Easy has been tabbed at 7-2 on the morning line for trainer Steve Asmussen. The chestnut colt, a son of Midshipman and bred in Kentucky, has won two of his four career starts. He broke his maiden by a neck in his second start in August and rebounded to win an optional claiming race at Churchill Downs after finishing ninth in the Kentucky Downs Juvenile. Richard Eramia will be aboard for the first time and the pair will break from post two.