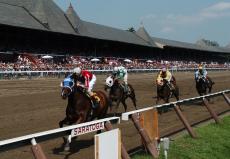 Sophomore sprinters will take center stage on Saturday at Saratoga in the 22nd running of the Grade 2 Amsterdam Stakes. With a purse of $200,000, the six and a half furlong contest serves as a key prep for the prestigious King’s Bishop Stakes (G1) on Travers Day.

Headlining the field of nine is Rock Fall, installed at 2-1 on the morning line. Trained by Todd Pletcher, the dark bay colt will carry the colors of Stonestreet Stables, LLC with Javier Castellano in the irons. A $250,000 purchase as a yearling, the son of Speightstown will be making his stakes debut after winning two of his three starts. Rock Fall will break from post position two.

Second choice on the morning line at 3-1 is Coup de Grace, a $300,000 yearling owned by Fox Hill Farm. Rosie Napravnik will be aboard for trainer Larry Jones following a narrow victory in the Oh Say Stakes in July. The son of Tapit has won four of his six starts and most notably won the Bay Shore Stakes (G3) in April. Since his victory, he has clocked a bullet workout at Delaware Park.

Also in the field is Captain Serious, tabbed at 4-1 on the morning line for trainer Michael Hushion. The New York-bred son of Successful Appeal had his three-race win streak snapped in the Dwyer (G3) where he finished second to Kid Cruz as the heavy favorite. Jose Ortiz, his regular rider, will be back aboard and the pair will break from post position eight.