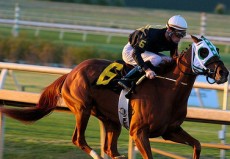 The $200,000 Golden State Juvenile Fillies October 31 at Santa Anita is one of four stakes races carded – an appealing appetizer before the main course of Breeders’ Cup Friday events.

The Golden State Juvenile fillies features a field of nine California-bred or sired fillies going seven furlongs on the main track.  Mi Fiona is the 2/1 morning line favorite for trainer Walther Solis after a narrow win and a narrow defeat in a pair of stakes races at Del Mar.  Prior to those efforts, Mi Fiona began her career with a maiden-breaking score at Santa Anita followed by a third place effort in the Landaluce Stakes.  It is noteworthy that Mi Fiona’s speed figures improved dramatically on Polytrack – a fact bettors could either attribute to natural progression with racing experience or a function of her preference for synthetic footing.  In either case, Mi Fiona has yet to run a poor race in four career starts.

Ashley’s Sassy (3/1) seemed to improve on the dirt last out at Santa Anita after beginning her career with a win and a third-place effort at Del Mar.  Her dirt Beyer Figure of 69 was earned against optional claimers while she recorded figures of 54 and 48 respectively on Polytrack against maiden special weight company.  Ashley’s Sassy defeated Easter Fever (7/2) by a length and a quarter last out.

Stormy Adieu (9/2) draws the rail and is another horse coming out of the optional claiming event October 2 at Santa Anita.  In that race, the Ingrid Mason trained-filly stalked quick fractions before fading to third behind Ashley’s Sassy and Easter Fever.  Stormy Adieu will break from the rail and could be the one to catch.