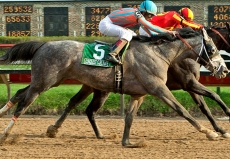 On Sunday at Woodbine, a field of thirteen Queen’s Plate hopefuls will compete in the $150,000 Plate Trial. Scheduled to be run at a mile and an eighth on the synthetic main track, the race will serve as a prep for the prestigious Queen’s Plate.

Mark Casse will saddle five starters including the favorite, Danzig Moon, at 5-2 on the morning line. A bay son of Malibu Moon, he has one win from seven starts and will be switching to synthetics for the first time after competing in the first two legs of the American Triple Crown. He has been training well since the Preakness Stakes (G1) and will have regular rider Julian Leparoux in the irons from post position twelve.

Second choice at 7-2 on the morning line is another Casse trainee, Conquest Curlinate. A gray son of Curlin owned by Conquest Stables, he has been on the board in four of his five starts and will be trying to earn the first stakes victory of his career. He was second last time out in the Peter Pan Stakes (G2) after closing from off of the pace. Shaun Bridgmohan will be back aboard and they will break from post ten.

Midnight Trace trying to return to winning for

Also in the field and a long shot at 20-1 on the morning line is Midnight Trace for Graham Motion. Owned by West Point Thoroughbreds, the gelded son of Scat Daddy has one win from four starts and will be trying to rebound after finishing off the board in both starts against stakes competition. He will get a rider change to John Velazquez and they are scheduled to break from post positionsix.