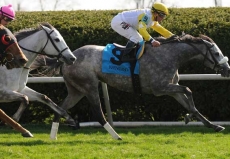 On Saturday at Pimlico, the stakes action will continue with the 64th edition of the $150,000 Gallorette Handicap. Carded at a mile and a sixteenth on the turf, the Grade 3 race has attracted a field of thirteen fillies and mares.

Christophe Clement will saddle Hard Not to Like as the morning line favorite in the competitive field at odds of 3-1. A six-year-old daughter of Hard Spun, she has won six of her eighteen starts  and was second in the Gallorette Handicap (G3) last year. After finishing first but getting disqualified and placed second in her seasonal debut, she was second last time out in the Jenny Wiley (G1). John Velazquez will be back aboard and they will break from post position seven.

Second choice at 5-1 on the morning line is Token of Love (GB) for trainer Graham Motion. A bay daughter of Cape Cross (IRE), she will be making her North American debut and was on the board in six of her seven starts in Great Britain. She has been on the shelf since September and has been training steadily for her stateside debut.  Jockey Trevor McCarthy will be aboard and they are scheduled to break from post position nine.

Also in the field at morning line odds of 5-1 is Mango Diva (GB) for trainer Michael Matz. A five-year-old daughter of Holy Roman Emperor (IRE), she has won four of her eleven starts and was a Group 2 winner in Ireland. She has been training forwardly for her first local start with two recent bullet workouts and will get Lasix for the first time.  Gary Stevens will be in the irons and they will break from post position ten for her first start of the year.