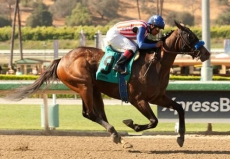 On Sunday at Santa Anita, the featured race is the 71st running of the $125,000 Landaluce Stakes. Restricted to two-year-old fillies, the five and a half furlong contest has drawn a field of seven.

Miss Gridley tops the wide open field as the morning line favorite at odds of 5-2 for trainer Peter Miller. Purchased for $175,000 earlier in the year, the chestnut daughter of Street Boss debuted as the favorite in May and finished fifth. She came back to break her maiden next time out over seven rivals and will be stepping up to stakes competition for the first time. Regular rider Tyler Baze will be in the irons and they will break from post position two.

Second choice at 5-2 on the morning line is Sambamzajammin for trainer John Brocklebank. Bred in California, the bay daughter of Heatseeker (IRE) was an $185,000 purchase in March and broke her maiden in her second start last time out as the heavy favorite against state-bred competition. She was second in her debut in May. Joe Talamo will remain aboard and they will break from post position seven as she makes her stakes debut.

Also in the field at morning line odds of 8-1 is Right There for trainer Keith Desormeaux. A dark bay daughter of Eskendereya, she is out of a half-sister to Hall of Fame and Kentucky Derby winner Silver Charm. She will be stepping up to stakes competition after finishing second as the favorite in her career debut last time out. Kent Desormeaux will be back aboard and they will break from post position six as she goes for her maiden win.