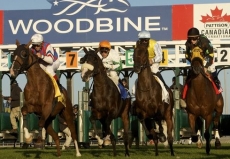 On Sunday at Woodbine, the featured race is the $100,000 Wando Stakes. Restricted to three-year-olds, the race will be contested at a mile and a sixteenth on the synthetic main track.

Decision Day tops the field as the morning line favorite at odds of 8-5 for trainer Josie Carroll. Bred and owned by Donver Stable, the dark bay son of Macho Uno has won two of his five starts. He is trying to return to form after finishing off-the-board in two starts at Gulfstream Park against graded stakes competition this year. Jesse Campbell will be in the irons and they are scheduled to break from the inside post.

Bill Mott will saddle Net Gain as the second choice at 2-1 on the morning line.  A bay son of Include, he has been on the board in four of his six starts and will be trying to earn the first stakes win of his career. He was last seen finishing third in the Private Term Stakes at Laurel and will be making his first start on a synthetic track. Patrick Husbands will be aboard and they will break from outside post in the field of five.

Also in the field at 3-1 on the morning line is Seventhfleethumor for trainer Nicholas Gonzalez.  A bay son of Afleet Alex, he has won two of his eight career starts and will be making his stakes debut. He won a starter optional claiming race last time out at Gulfstream Park as the favorite by four lengths. Jockey Emma-Jayne Wilson will be aboard and they are slated to break from post position two.