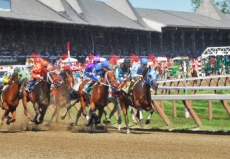 The featured Summer Colony Stakes Monday, August 24 at Saratoga has drawn a field of six fillies and mares set to contest the 1 1/8-mile tilt on the main track.

Tiz So Sweet is the 9/5 morning line favorite for trainer Bill Mott after winning her comeback race July 27 at Belmont following a 13-month absence from racing. The lightly-raced four year-old daughter of two-time Breeders’ Cup Classic winner Tiznow suffered an injury following a fifth place effort in the Grade 1 Acorn Stakes in 2014. With a strong distance pedigree, Tiz So Sweet should find the Summer Colony distance to her liking. Junior Alvarado will be aboard breaking from the rail.

Catch My Drift looks for a "W"

Catch My Drift (2/1) should contend for post time favoritism despite entering the Summer Colony on a four-race losing streak for trainer Chad Brown. The four year-old lost a trio of stakes races before finishing second in her last start June 24 against allowance foes at Belmont. With 3 wins in 8 career starts, Catch My Drift will break from post 3 with Irad Ortiz in the irons.

Montana Native (7/2) could have plenty to say about the outcome for trainer Christophe Clement. The well-traveled runner exits a pair of third-place finishes against stakes competition and is thrice graded –placed in her 22-race career. Joel Rosario will ride breaking from post 4. Samantha Nicole (6/1), a full sister to champion mare Rachel Alexandra, seems to be figuring out the racing game with two wins, a second and a third in her last four starts. This will be her first try against stakes company while making her eighth career start.