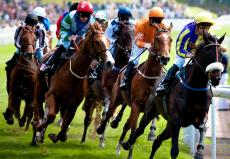 The August 14th card at The Spa features a New York state bred stakes race in race four – the $100,000 Saratoga Dew Stakes for fillies and mares going a mile and an eighth on the main track.

Tahoe Tigress is the 2/1 morning line favorite for trainer Jeremiah Englehart after an allowance victory at Belmont Park June 19.  The five year-old daughter of Stephen Got Even has been idle since that race and has started only three times since December of 2013.  In stakes competition this year, Tahoe Tigress finished second in the Judy Soda Stakes at Aqueduct in January and fourth in the Critical Eye Stakes at Belmont May 31.  She ran fifth in the 2013 Saratoga Dew Stakes.

Trainer Mitchell Friedman sends out the coupled entry of Carameaway and Dreaming of Cara listed at 3/1 on the morning line despite the fact that the pair is a combined 0 for 14 this year.  Dreaming of Cara most recently finished ninth in an allowance race at Saratoga and Carameaway ran eighth in the Critical Eye Stakes.  Given the poor recent form of those runners, bettors will likely find Easy Living (7/2 ML) an appealing choice – especially given the combination of trainer Christophe Clement and top jockey Joel Rosario.

Easy Living is a lightly-raced filly with two wins in four lifetime starts.  The daughter of 2008 Kentucky Derby hero Big Brown beat an allowance field July 12 at Belmont in her last start and has finished off the board just once – a fourth place effort against allowance company June 12 at Belmont.  She is two for three this year.