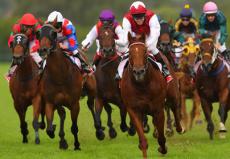 The $100,000 Lure Stakes, run at a mile and a sixteenth on the turf, caps a tantalizing stakes card August 2 at Saratoga as the eleventh and final race of the afternoon.

The Lure features 14 entries – three of which are entered for the main track only including 2/1 favorite Alpha who won the Grade I Woodward and Grade 1 Travers at Saratoga in 2013 and 2012 respectively.  It is certainly noteworthy that Alpha’s Woodward score came on a sloppy track and produced a career-best Beyer speed figure of 109.

If the race stays on the grass as expected Big Blue Kitten (5/2 ML) will likely assume the favorite’s role for trainer Chad Brown.  Big Blue Kitten has been inactive since an eighth-place finish in last year’s Breeder’s Cup Turf, but has worked steadily for Brown who boasts a 23% winning percentage with runners returning from layoffs of 180 days or more.  Big Blue Kitten is 10 for 19 lifetime including 2 for 2 at the Spa.

For handicappers who like to see a bit more recent form, the Timothy Hills trained Kharafa fits the bill with three straight exacta finishes – including two in minor stakes competition.  Kharafa has finished in-the-money in seven of eight career starts at the mile and an eighth distance.  Plainview (5/1 ML) also looks like a major player for trainer Gregory DiPrima.  Plainview is a perfect three for three on the Saratoga turf and should control the race with his early speed.