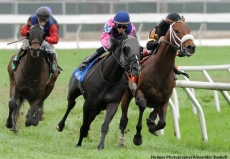 The $100,000 Kitten’s Joy is the last of five stakes races on the card January 24 at Gulfstream Park, with a field of twelve three year-old colts set to contest the one mile turf race.

Dr No is the 3/1 lukewarm favorite for trainer Graham Motion after finishing a troubled fourth in a $75,000 optional claiming race December 20 at Gulfstream.  The race was Dr No’s first in over three months, and his first in the United States after six starts in Great Britain.  In his United States debut, Dr No went off as the 5/2 favorite, but never really had a chance after steadying repeatedly in the stretch.  Dr No has just one win in seven starts, but did compete at the Group 2 and Group 3 level in Europe.

Dubai Sky goes for three in a row

Hall of Fame trainer Bill Mott will saddle the 4/1 second choice in Dubai Sky.  The colt finished his two year-old season with consecutive wins on the grass after finishing third in his debut.  Dubai Sky defeated Dr No in his most recent start showing a nice rating gear after breaking his maiden in gate-to-wire fashion.  John Velazquez, who was aboard for that performance, again has the mount.  The pair will break from post four.

It’s difficult to discount Croninthebarbarian (6/1), who always seems to run his race.  The lightly-framed colt has two wins in six starts with just one off-the-board finish.  His third place effort in the Grade 3 Dania Beach last out was excellent considering he received a wide trip.  Leading rider Javier Castellano gets the call for trainer Garry Simms.