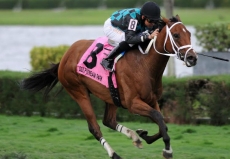 On Saturday at Saratoga, the stakes action will continue with the $100,000 Fasig Tipton De La Rose Stakes.  Restricted to fillies and mares, the stakes race will be contested at one mile on the turf and has drawn a field of twelve.

Daring Kathy tops the wide-open field as the morning line favorite at odds of 3-1 for trainer Chad Brown. A four-year-old daughter of Wildcat Heir, she has won seven of her ten starts and will be trying to earn her fourth consecutive victory. She returned off of an eight-month layoff last time out to win the Perfect Sting Stakes at Belmont Park by a nose in a minor upset performance. Javier Castellano will be aboard the graded stakes winner and they will break from post position nine.

Second choice at 4-1 on the morning line is Stellar Path (FR) for trainer Christophe Clement. A four-year-old daughter of Astronomer Royal, she has won six of her sixteen starts and was Group 3 stakes winner in her native France. She has one win since her stateside debut in April and was last seen finishing third in the Eatontown Stakes (G3) at Monmouth Park. Joel Rosario will be aboard from the outside post.

Also in the field at morning line odds of 15-1 is longshot Tuttipaesi (IRE) for trainer Bill Mott. A five-year-old daughter of Clodovil (IRE), she has won four of her eleven starts and was a minor stakes winner in 2013. She has had several layoffs since then and will be making her first start since finishing fourth in an optional claiming race at Gulfstream Park in February. Junior Alvarado will be in the irons from post two.