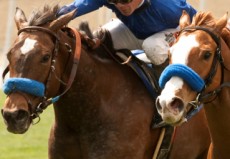 On Saturday at Santa Anita, the featured race is the $100,000 California Distaff Handicap. Restricted to California-bred fillies and mares, the six and a half furlong contest will be run over the downhill turf course and has drawn a field of eleven with one additional filly listed as also-eligible.

Tribal Spy has been installed as the 7-2 morning line favorite for trainer Adam Kitchingman. A four-year-old daughter of Tribal Rule, she has won six of her seventeen starts, three of which have come at Santa Anita. After a sharp start to the year, she has been fourth in her last two starts and has had two months since her last race. Joe Talamo remains aboard and they will break from post nine.

Velvet Mesquite a horse for the course on Santa Anita turf

Second choice at 9-2 on the morning line is Velvet Mesquite, a homebred daughter of In Excess (IRE) for Harris Farms. Trained by Blake Heap, the four-year-old filly is switching back to turf after a sixth place finish over synthetics at Del Mar. She has won four of her eight starts, all over the Santa Anita turf course. Mike Smith has picked up the mount and they will break from the outside.

Also in the field is Global Hottie at odds of 8-1 on the morning line for Bob Baffert. The lightly-raced filly has won two of her three starts and will be trying the turf for the first time after winning on synthetics and conventional dirt as the heavy favorite in both races. A three-year-old daughter of Dixie Chatter, she was purchased for $190,000 as a juvenile. Martin Garcia, aboard for all three races, will be back in the irons and they will break from the rail.