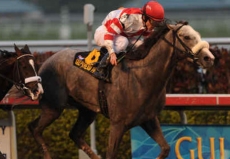 The Grade 2, $200,000 Inside Information Stakes is the featured event March 19 at Gulfstream as a field of ten fillies and mares will line up to contest the seven furlong event on the main track in what shapes up to be an enticing betting race.

8/5 morning line favorite Stonetastic has proven to be an exceptionally fast horse with plenty of gate speed for trainer Kelly Breen. The five year-old mare has won 5 of 15 career starts, earning over half a million dollars for her connections. The favorite enters the Inside Information in good form after a successful 2016 debut in the Miami Shores Handicap February 14 at Gulfstream. The veteran mare has shown an affinity for Gulfstream, hitting the board in all three career starts while racing exclusively in stakes races. Jockey Paco Lopez will be aboard breaking from post 8.

Bar of Gold (4/1) is another quick filly who has proven herself against top-class competition. The John Kimmel trainee makes her four year-old debut after a successful three year-old campaing that saw her finish second in three consecutive graded stakes including the Grade 1 Test. Bar of Gold is comfortable at the seven furlong distance and is a logical win candidate if able to duplicate her 2015 form first off the layoff. The filly last raced October 17 at Keeneland finishing second in the Grade 2 Raven Run Stakes.

Best Behavior tough as they come

Best Behavior (5/1) has won 9 of 29 starts to go with 9 runner-up and 7 third-place finishes. Only nice horses finish in the money 25 of 29 starts while racing against top company. The Marty Wolfson trainee is in sharp form, and defeated Stonetastic December 29 at Gulfstream in the Grade 2 Sugar Swirl Stakes.