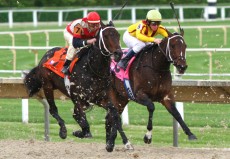 On paper, the 96th running of the Grade 1 Jockey Club Gold Cup looks to be a race with very few throw-outs as a logical and compelling case can be made for at least half the field to win the $1 million dollar Breeders’ Cup Win-and-You’re-In event at Belmont Park September 27.

The field includes nine solid, but unspectacular older horses, shifting the attention to a trio of three-year-old runners that includes the Travers winner, the Belmont winner, and the Jim Dandy winner.  V.E. Day (5/1), Tonalist (4/1), and Wicked Strong (3/1) face their elders for the first time after comprising the Travers trifecta - a race that featured the coming-out party of long-shot winner V.E. Day.   All three runners have a win over the track at Belmont and enter the race in top form.

Belmont Stakes winner Tonalist is undefeated in two tries over the local strip and removes the blinkers for trainer Christophe Clement – a move that might encourage the three-year-old son of Tapit to relax further off the pace in the early stages before making a sustained run in the stretch.  V.E. Day also figures to demonstrate his late closing kick as he tries to win his fifth consecutive race.

Wicked Strong should be close to early pace

Wicked Strong should find a tracking position behind Moreno who is the likely pace-setter.  Moreno (7/2) won the Grade 1 Whitney in gate-to-wire fashion and nearly duplicated that feat in the  Grade 1 Woodward last out.   Another dangerous older horse is Zivo (6/1) who defeated Moreno at Belmont in the Grade 2 Suburban on July 5 for trainer Chad Brown.