Kentucky Derby Winners of The 1970s 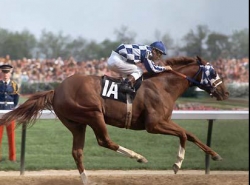 In the 1970s, the great Secretariat arrives on the scene, three winners go on to take the Triple Crown, and one of the great rivalries of the sport between Affirmed and Alydar is born!

1979 - Following the three Triple Crown winners of his decade, Spectacular Bid looked poised to become the fourth after winning the Kentucky Derby by an easy 2 3/4-lengths and the Preakness by an easier 5 1/2-length margin. In the Belmont, however, jockey Ronnie Franklin gave the star colt a dubious ride resulting in a third-place finish.

1978 - Affirmed's Kentucky Derby win and Triple Crown sweep are even more notable in the context of his thrilling rivalry with Alydar. The latter colt ran second to Affiirmed in all three races, including tight finishes in both the Preakness and Belmont. No horse would win the Triple Crown again for 37 years when American Pharoah accomplished the feat in 2015.

1977 - Few names resonate in the history of horse racing like Seattle Slew's. The speedy horse overcame a uncharacterstically slow start in the Kentucky Derby, but made the lead and held sway in the stretch. The colt returned to win the Preakness and Belmont in fine fashion to become the tenth Triple Crown winner in racing history.

1976 - An exceptionanlly fast horse, Bold Forbes upset the heavily-favored Honest Pleasure in the Kentucky Derby with an impressive gate-to-wire win. After tiring in the Preakness, Bold Forbes returned to win the Belmont by a half length with another front-running score.

1975 - Unbeaten as a two year-old, Foolish Pleasure continued his winning ways in his three year-old campaign taking the Flamingo Stakes and Wood Memorial before winning the Kentucky Derby. The colt would finish second in both the Preakness and Belmont Stakes behing less fancied runners.

1974 - Facing the biggest Kentucky Derby in field in the race's history, Cannonade and his entry-mate Judger were sent to post as the favorite. Cannonade made the front with a quarter mile to run and finished strongly for the win. He would return to run third in both the Preakness and Belmont to Little Current.

1973 - Few stars have transcended their sport like Secretariat. The subject of Hollywood films and racing lore, the horse nicknamed "Big Red" still holds the fastest Kentucky Derby time in the race's history, and likely would have earned the same accomplishment in the Preakness if not for a timer malfunction. His 31-length Belmont win capped his historic Triple Crown-winning campaign.

1972 - A stablemate of the famed Secretariat, Riva Ridge won the Derby a year before his better-known barn buddy, and was a tremendous horse in his own right. Despite finishing fourth in the Preakness over a sloppy track Riva Ridge came back with a convincing 7 1/4-length win in the Belmont.

1971 - In one of the more impropable longshot stories in Kentucky Derby history, Canonero II, an unheralded Venezeulan-raced colt, shipped to Churchill Downs for the Kentucky Derby where he was given little shot. The plucky, light-framed colt delivered a powerful closing kick however to win the race. He proved it was no fluke when he won the Preakness, but tired to finish fourth in the Belmont.

1970 - Despite being sent to post at odds of 15/1, Dust Commander overcame a bump at the start to launch a winning rally around the turn and win by a widening five lengths. The colt would finish ninth in the Preakness and did not contest the Belmont Stakes.