Kentucky Derby Winners of The 1960s 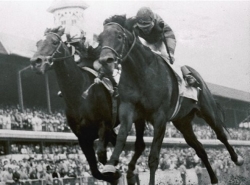 The 1960s sees the one-and-only disqualification of a Derby winner, the first Canadian-bred horse to win the race, and the great jockey Bill Hartack takes the race four times!

1969 - Purchased for a hefty price as a yearling, Majestic Prince proved worthy of the investement as he entered the Kentucky Derby favored and unbeaten. Facing a talented, but compact field, the blueblood colt fought off Arts and Letters through the stretch to win by a neck. Majestic Prince then won the Preakness before finishing second in the Belmont to Arts and Letters.

1967 - An afterthought in the 14-horse Kentucky Derby, Proud Clarion entered the race with only a few sprint victories under his belt, justifying his 30/1 odds. The improbable winner showed good accelaration in the stretch to win by a length over a field that included the likes of Damascus. That rival would go on to win the Preakness and Belmont where Proud Clarion finished third and fourth respectively.

1966 - The only Maryland-bred horse to win the Kentucky Derby, Kauai King proved to be one of the best of his generation, returning two weeks later to take the Preakness in his home state. The colt finished fourth in the Belmont Stakes which was held at Aqueduct that year.

1965 - Sent to post as the second choice against an all-star crop of three year-olds, Lucky Debonair captured the Kentucky Derby while also giving jockey Bill Shoemaker his third win in the race. In the Preakness, a sore ankle likely contributed to Lucky Debonair's seventh-place finish. The colt did not contest the Belmont Stakes.

1964 - Northern Dancer won the Kentucky Derby and remains the greatest Canadian-bred horse of all-time in addition to one of the most impactful stallions the sport has ever known. The national hero also captured the Preakness Stakes before finishing third in the Belmont.

1963 - Despite winning an important prep in the Bluegrass Stakes, Chateaugay was sent to post in the Derby at odds of 9/1 behind a star-studded cast. The colt raced well of the early leaders before unleashing a steady bid to win by a length and a quarter. Chateaugay would finish second in the Preakness before winning the Belmont.

1962 - An exceptionally talented colt on his best day, Decidedly picked a good time to be at his best, winning the Derby and setting a new Churchill Downs record for a mile and a quarter. Decidedly did not carry his form foward, finishing out of the money in both the Preakness and Belmont Stakes.

1961 - Small, gritty and working class, Carry Back became one of the most popular Kentucky Derby winners of his era. The come-from-behind colt unleashed a furious stretch rally in the Run for the Roses to prevail by less than a length and returned two weeks later to win the Preakness in similar fashion. Carry Back ran seventh in the Belmont, but enjoyed a long and successful career.

1960 - Despite a modestly successful career otherwise, Venetian Way made his mark in history with a convincing 3 1/4-length win in the Kentucky Derby. The colt would finish fifth in the Preakness and second in the Belmont Stakes.