Kentucky Derby Winners of The 1940s 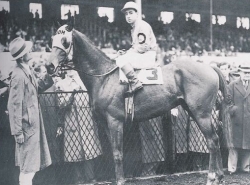 In the 1940s, a Derby winner sires another Derby winner, the legandary Whirlaway wins easy, and the only Texas-bred winner appears!

1949 - Representing the powerful Calumet Farm, Ponder proved to be something of a late bloomer. The late-running colt finished second to the well-regarded Olympia in the Derby Trial tipping his improvement to the public. In the Kentucky Derby, Ponder unveiled the same late closing kick to win with a rush. Ponder would finish second in both the Preakness and Belmont.

1948 – One of the greatest racehorses in the history of the sport, Citation was already a bona fide superstar by the time the 1948 Derby rolled around. The big horse didn’t disappoint, winning by an easy 3 1/2-lengths. He followed that effort with a 5 1/2-length win and then captured the Belmont in record time to become the eighth Triple Crown winner in history.

1947 – Jet Pilot, a precocious and fast juvenile runner was well-touted many months leading up to the Kentucky Derby and didn’t disappoint on the first Saturday in May. The speedy colt broke quickly and maintained the lead throughout to defeat the favored Phalanx. Jet Pilot finished fourth in the Preakness and was retired before the Belmont.

1946 – Despite physical fragility and having to battle various ailments early in his life, Assault became the first and only Texas-bred horse to win the Kentucky Derby. The colt continued to overcome the odds, also winning the Preakness and Belmont to become racing’s seventh Triple Crown winner.

1945 – Hoop Jr. took to the muddy track with aplomb in the 1945 Kentucky Derby, earning the lead soon after the gates opened and staying in command throughout to win by a widening six lengths at the wire. The colt finished third in the Preakness, which was just a week later in those days, and bowed a tendon forcing his retirement.

1944 – Pensive was an easy winner of the 1944 Derby, scoring by over four lengths. The colt won the Preakness and fell just short of the Triple Crown, losing the Belmont Stakes by half of a length. In a rare feat, Pensive sired 1949 Kentucky Derby winner Ponder.

1943 – A two year-old champion in 1942 while winning 10 of 15 starts and a handful of prestigious stakes, Count Fleet was highly regarded, but surpassed even the most lofty expectations as a three year-old. The powerful colt easily swept the Triple Crown series, notably winning the Belmont by 25-lengths – the second largest margin of victory ever behind Secretariat’s 31-length victory.

1942 – One of the most accomplished horses of his generation Shut Out won the Kentucky Derby, Belmont, Travers Stakes, and Blue Grass Stakes. The colt ran fifth in the Preakness after a troubled trip.

1941 – One of the most decorated Thoroughbred racehorses of all-time, Whirlaway still holds the record for margin of victory in the Kentucky Derby with a dominant eight-length score. The colt proved his brilliance by sweeping the remaining Triple Crown races, and is the only horse to win the Triple Crown and Travers Stakes.

1940 – Racing against the heavily-favored Bimelech who went to post at 2/5, little chance was given to 36/1 outsider Gallahadion. But in one of the more notable upsets in Derby history, Gallahadion prevailed over Bimelech. That rival would return to win both the Preakness and Belmont where Gallahadion finished third and unplaced respectively.