Kentucky Derby Winners of The 1930s 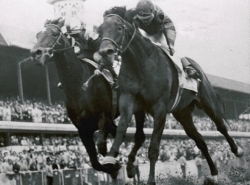 The 1930s see three Derby winners go on to take the Triple Crown, the only Kansas-bred horse to ever win the Derby, and the legendary War Admiral begins his journey toward one of racing greatest rivalries!

1939 – A consistent and proven winner fresh off a victory in the Wood Memorial Stakes, Johnstown was an obvious contender to wear the roses, and made good on that promise, delivering a decisive eight-length score – still tied for the largest margin of victory in the Kentucky Derby. The colt finished fifth over a muddy track in the Preakness before winning the Belmont Stakes.

1938 – Raced 23 times before the Kentucky Derby, Lawrin brought plenty of experience to the Kentucky Derby and emerged a narrow winner over the fast-charging Dauber. Lawrin is the only Kansas-bred horse to ever win the Derby. The colt did not contest the Preakness or Belmont Stakes.

1937 – Popularly known as Seabiscuit’s main rival, War Admiral was one of the greatest racehorses of the 20th century, winning the Kentucky Derby in front-running fashion and returning to take the Preakness and Belmont with ease. The Admiral, as he was affectionately known, was racing’s fourth Triple Crown winner.

1936 – Despite not having a single stakes victory to his credit and being ridden by an apprentice jockey, Bold Venture won the Kentucky Derby at 20/1 odds. The plucky colt found the lead down the backstretch and did not relinquish it. Bold Venture won the Preakness, but was retired prior to the Belmont due to an injury.

1935 –On a particularly cold and rainy Derby day, Omaha took the lead down the backstretch and held sway the rest of the way in front of $50,000 fans at Churchill Downs. The leggy colt used his powerful closing kick to win the ensuing Preakness and Belmont Stakes en route to becoming racing’s third Triple Crown champion.

1934 – Cavalcade was made the betting favorite in the 1934 Derby and did not disappoint his backers, as the talented colt swept passed the field entering the stretch and never looked back. Cavalcade was beaten a nose in the Preakness and did not run in the Belmont Stakes.

1933 – In one of the wildest and most memorable Kentucky Derby’s on record, Broker’s Tip prevailed by a nose over Head Play as their jockeys engaged in fisticuffs down the stretch. The win was Broker’s Tip’s lone career victory in 14 career starts, making him the only horse with such credentials.

1932 – With 20 starters lined up, Burgoo King benefitted from a clean trip and took the lead around the final turn. When asked in the stretch, the colt responded by pulling clear for a facile three-length score. In the Preakness, Burgoo King beat Derby favorite Tick On by a head, and did not run in the Belmont likely because of injured ankles.

1931 - As one of the top horses to race in the 20th century, Twenty Grand enjoyed a particularly strong three year-old campaign. The talented colt won the Kentucky Derby and Preakness before suffering his only loss of the year with a second place finish by a nose in the Belmont following a troubled trip.