Kentucky Derby Winners of The 1920s 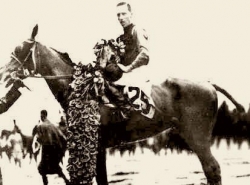 In the 1920s, a classic Derby song makes it's debut, one of the slowest Derby times ever is run, and a Louisiana bred ships in for the win.

1929 - Named after his trainer, former jockey Clyde Van Dusen for his small stature, the equine Clyde Van Dusen glided over a sloppy track to win the Kentucky Derby by two lengths albeit in the very slow time of 2:10 4/5. The gutsy gelding would never win another major race, and it would be another 74 years before another gelding would wear the roses.

1928 - Reigh Count's exceptional career included a win in the Kentucky Derby during a three year-old season where the colt was dominant. An injury forced Reigh Count to miss the Preakness and Belmont, but he won the Queen's Plate in Canada and the Jockey Club Gold Cup at Belmont. As an older horse, Reigh Count was shipped to England, winning major races on turf and proving his versatility.

1927 - Whiskery defeated Osmand to win the 1927 Kentucky Derby in a thrilling stretch duel. The colt would go on to finish third in the Preakness and claim Three Year-Old Horse of the Year honors. Jockey Linus McAtee was aboard for Whiskery's win - ther first of two Kentucky Derby's the rider would win in his career.

1926 - Already winner of the Champagne, Nursery and Blue Grass Stakes, Bubbling Over added the biggest race in North America to his resume, easily winning the 1926 Kentucky Derby by five lengths.  The colt never finished out of the money in 13 starts and at stud, sired Kentucky Derby winner Burgoo King.

1925 - In the first radio broadcast of the Kentucky Derby, a rain storm doused the Churchill Churchill Downs track leaving the surface extremely sloppy. Flying Ebony found the footing to his liking to win by a length and a half. The colt did not race in the Preakness or Belmont and would race just three more times.

1924 - In a Derby of traditional landmarks, the 50th Kentucky Derby was the first to feature the playing of "My Old Kentucky Home" prior to the race. The Louisiana-based Black Gold was the post time favorite and overcame a troubled trip to win the race. Black Gold did not contest the Preakness or Belmont.

1923 - In a year where the Preakness was run before the Derby, Zev finished twelth, but came back with flying colors to win the roses. The colt then back that winning effort with another victorious performance in the Belmont. Later that year, in one of the most celebrated match races of all-time, Zev defeated English Derby winner Papyrus by five lengths.

1922 - A superstar from the first day he set foot on the track, Morvich won all 11 races as a two year-old and was subsequently made the favorite in the 1922 Kentucky Derby despite making his three year-old debut. Showing no signs of rust, the brilliant colt won easily to stay unbeaten. In 1922, the Preakness was run on the same day as the Derby. Morvich did not compete in the Belmont Stakes.

1921 - Behave Yourself, racing against his more fancied stablemate Black Servant, might be the only Kentucky Derby winner to actually draw the ire of the winning owner. It is rumored that when Behave Yourself crossed the wire in front of Black Servant, owner Edward R. Bradley might have actually lost money due to a large win bet on the other colt.

1920 - With Man o' War bypassing the Kentucky Derby because of his owner's belief that the race and travel would be too demanding on his star colt, Paul Jones defeated a 17-horse field, besting Upset who, coincidentally, was the only horse to ever defeat Man o' War. Paul Jones became the sixth gelding to win the Kentucky Derby.