Kentucky Derby Winners of The 1910s 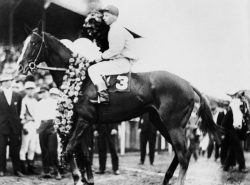 In the 1910s, the first filly wins the Derby, the longest longshot of all time takes a win, and the first Triple Crown winner appears!

1919 - A horse that started as the pacemaker for his more highly touted stablemate ended up winning the Kentucky Derby and becoming racing's first Triple Crown winner. Sir Barton was still a maiden entering the 1919 Kentucky Derby, and did his job making the front to ensure a fast pace for stablemate Bill Kelly, but kept on going to win by five lengths.

1918 - A leggy colt over 17 hands tall, Exterminator demonstrated talent to match his size, winning the Derby by a length over a muddy track despite making the first start of his three year-old season. Sent to post at odds of 30/1, the colt was an afterthought to run in the Derby, and was only entered when a stablemate scratched. Nicknamed "Old Bones," Exterminator made 99 career starts with a record 33 stakes wins.

1917 - The first foreign-born horse to win a Kentucky Derby, Omar Khayyam unleashed a powerful stretch charge at odds of 13/1 to avenge a loss in his previous start to a horse named Ticket. Omar Khayyam, named after a Persian mathematician, did not race in the Preakness or Belmont.

1916 - Named after the birth name of legendary gambler "Pittsburgh Phil," George Smith was a leading contender for the Kentucky Derby and deated eight rivals with Hall of Fame rider Johnny Loftus in the irons. Two years later, George Smith would defeat a pair of Derby winners - Omar Khayyam and Exterminator - in the Bowie Handicap.

1915 - The first of only three fillies to win the Kentucky Derby, Regret also accomplished the feat with just three starts under her belt - something only Big Brown (2008 Derby winner) accomplished.

1914 - A delicate, but talented runner, Old Rosebud captured the 1914 by a record margin - eight lengths - that has been tied, but never broken. The gelding competed until the age of 11, winning half of his 80 starts.

1913 - Sent to post at the staggering odds of 91/1, Donerail is the biggest longshot to ever win the Kentucky Derby. Sitting behind a wickely fast pace, Donerail made a late closing move to win by a half length over Ten Point.

1912 - A winner of the Bashford Manor Stakes at Churchill Downs as a juvenile, Worth reiterated his preferance for the track, winning the 1912 Kentucky Derby. Tragically, nearly six months later, Worth sustained fatal injuries in a race at Pimlico.

1911 - Meridian defeated seven rivals in the 1911 Derby and set a new track record in the process. While the final clocking of 2:05 would be considered pedestrian by today's standards, it was over a full second faster than the previous mark.

1910 - While the antics and disposition of Donau were well-documented, some of those very charactertistics made the horse a fierce competitor. In the 1910 Kentucky Derby, Donau took on all challengers, racing close to a contentious early pace, exchanging bumps with rivals, and continuing on gamely to earn the win.