Kentucky Derby Winners of The 1900s 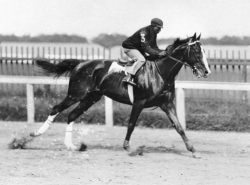 In the first decade of the new century, one Derby only has three horses in the race, the first woman owner wins a Derby, and the great Alan-a-Dale fights through injury to win!

1909 - Wintergreen's Kentucky Derby score represented the first time a horse bred in Ohio had won the signature race. Althought the colt turned gelding later in his career did not win any more stakes races, he was competitive against top-class compeition until his death in 1914.

1908 - Sent to post at odds of 24/1 against seven rivals, Stone Street enjoyed the sloppy track and splashed home well ahead of his rivals. The winning colt had never won a major stakes race prior to his Kentucky Derby score, and would not win another stakes race for the remainder of his career. His winning time of 2:15 1/5 is the slowest winning time in Kentucky Derby history at the 1 1/4-mile distance.

1907 - While not a popular pick at the betting windows, Pink Star won the Kentucky Derby over a deep, muddy track by two lengths over his closest rival. Pink Star was a son of 1883 Kentucky Derby winner Leonatus.

1906 - Despite making his three year-old deubt, Sir Huon showed little signs of racing rust to win the 1906 Kentucky Derby by two lengths over filly Lady Navarre. Sir Huon went on to win notable races such as the Latonia Derby.

1905 - In a sign of just how far the Kentucky Derby has increased in popularity over its grand history, 1905 winner Agile faced just two rivals en route to victory. After performing stud duty, Agile served as a carriage horse in Texas for his owners.

1904 - Bred by a Mrs. J.B. Prather and owned by Laska Durnell, Elwood was the first - and one of the only Kentucky Derby winners to be both bred and owned by a woman. A horse of little note during his two year-old campaign in California, Elwood was raced in Laska Durnell's name, who reportedly entered the colt in the Derby without her husband's knowledge and traveled with the colt by train from California to Kentucky. At 15/1 odds, Elwood surprised his five rivals in the 30th Kentucky Derby.

1903 - A grandson of the great Longfellow on his mother's side, Judge Himes fulfilled the potential of his pedigree with a 1903 Kentucky Derby win - one of five stakes scores the colt would tally in his career.

1902- A son of 1895 Kentucky Derby winner Halma, Alan-a-Dale immortalized his name with a Kentucky Derby score earned in heroic fashion. The colt opened up a clear lead in the stretch, but was clearly injured and still held off his foes to win by a neck.

1901 - His Eminence, a well-bred colt with plenty of stamina, won the 1901 Derby with African American jockey Jimmy Winkfield aboard. Winkfield would make it two in a row the following year aboard Alan-a-Dale.

1900 - Liet. Gibson was one of the fastest Kentucky Derby winners of his era, stopping the timer in 2:06 1/4 -  a record that would stand for the next eleven years.