Kentucky Derby Winners of The 1890s 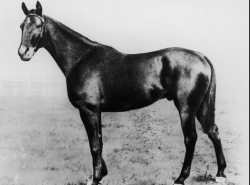 The closing decade of the 1800s sees the last Derby run at 1 1/2 miles, the crowds started to build, and a well-regarded favorite overcame a lot of trouble to win by a nose!

1899 – The 25th running of the Kentucky Derby featured a field of just five horses with the winner – a colt named Manuel – earning $4,850 for the victor’s share of the purse. Manuel prevailed by two lengths over Corsini with Mazo another length and a half behind in third.

1898 – Just four horses contested the 1898, but that didn’t mean there wasn’t plenty of excitement as Plaudit bested Lieber Karl by just a nose at the wire. The winner completed the mile and a quarter in 2:09 flat.

1897 – A tall, lean colt, Typhoon II defeated the favored Ornament over a muddy Churchill Downs track at odds of 11/5. The colt would win several more important races during the 1897 season including the St. Louis Club Members Handicap which carried a $12,000 purse - significantly more than the Derby.

1896 – A winner of the Champagne Stakes at two, Ben Brush had already established himself as a top class runner by May of 1896. Despite making his seasonal debut, never having contested a race longer than seven furlongs, and stumbling out of the gate, Ben Brush scored earned a nose victory in the Run for the Roses and went on to earn several more significant wins in his career.

1895 – In the final iteration of the Kentucky Derby run at the mile and one half distance, Halma proved himself the best stayer just three days after winning the Phoenix Hotel Stakes at Keeneland which was, and still is run at six furlongs. Halma also won the Clark Handicap and Latonia Derby during the 1895 season.

1894 – The well-bred Chant was closely related to a number of previous and would-be Derby winners. In addition to winning the Kentucky Derby, Chant also won the Phoenix Stakes and Clark Handicap – a trio of races Halma would also sweep the following year.

1893 – Lookout made the lead, was well-rated by jockey Edward Kunze and extended his lead at every pole, easily dispatching five rivals including the well-regarded Boundless. The 10,000 or so spectators at Churchill Downs for the 1893 Derby comprised one of the largest crowds to witness the event since its inception.

1892 – Azra defeated just two rivals in the smallest Kentucky Derby field ever assembled, but went on to win both the Travers and Clark Handicap, proving himself a top-class animal.

1890 - A son of the great racer Longfellow, Riley proved himself a capable mudder while winning the 1890 Derby. In 64 career starts, the bay colt won 30 times including a lengthy list of stakes victories.