Kentucky Derby Winners of The 1870s 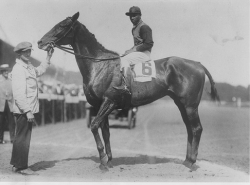 In the 1870s, the greatest two minutes in sports is born, when Aristides becomes the first ever winner of the Kentucky Derby!

1879 – Although Falsetto ended up the better known and more accomplished racehorse, he would play second-fiddle to Lord Murphy who bested the eventual champ in the 1879 Kentucky Derby. Contested on May 20, the field of nine comprised the fifth running of the race.

1877 – Sired by the first ever English Triple Crown winner West Australian, Baden Baden was predestined to become a great racehorse and did just that, winning the Kentucky Derby, Travers Stakes, and Jersey Derby in 1877. The colt also finished third in the Belmont Stakes.

1876 - The first of just nine geldings to ever win the Kentucky Derby, Vagrant was a dominant and successful racehorse who racked up several major wins during his two year-old and three year-old seasons. So impressive was the horse, millionaire owner William B. Astor paid $7,000 to acquire Vagrant.

1875 – Forever immortalized as the first winner of the now storied Kentucky Derby, Aristides defeated 14 horses in front of 10,000 fans. The smallish colt went on to finish second in the Belmont Stakes.