What Does a Race Horse's Class Mean? 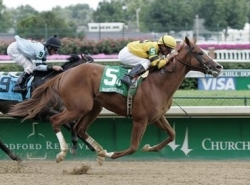 Class. The word is one of the most common, yet elusive terms in racing. Objectively speaking, class can be defined as the quality of competition a horse has kept. A runner competing against good horses is always likely to defeat runners who have been competing against inferior stock. While that may seem obvious, there are serveral lessons a beginning handicapper must learn about with regard to class.

The concept of class is probably most useful when comparing runners in the claiming and allowance ranks. An average runner at the $40,000 claiming level, in theory, would almost assuredly make quick work of a $10,000 field if given the opportunity, but such sweeping assumptions are rarely safe bets in the perilous world of thoroughbred racing. Such "class droppers" usually come with their fair share of physical maladies and other issues that must force the bettor to determine why an owner or trainer would risk losing the $40,000 animal for a quarter of his value if something weren't amiss. Thus, precipitious class droppers are rarely good bets as the average handicapper tends to give them too much credit. Moreover, these runners typically go to post an unappealing odds, further adding to the problem.

Moving up and down in class

On the flip side, a horse that has been winning or competing strongly at a lesser class level, can usually be looked upon with favor when the horse is entered against slightly better competition. Let's say a $12,500 claimer has reeled off consecutive victories at that class level and suddenly gets entered against $20,000 claiming foes. The former $12,500 claimer will typically stand a better chance of winning at the $20,000 level than a middling class dropper from the $40,000 level. In simple terms, moving up the class ladder is almost always a more positive indicator than being demoted down the class ladder.

One of the rare exceptions to this rule applies to maiden runners. A horse dropping from maiden special weight company to the maiden claiming ranks is often said to be taking the most signficant drop in horse racing. These runners often make excellent bets - particuarly if they have shown early speed or ability at the maiden special level.