How to Read Past Performance Running Lines And Pace 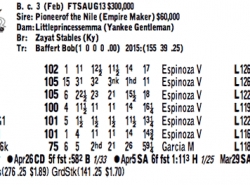 There's an expression as old as the sport of horse racing that holds true perhaps better than any other single tool used to analyze a race: pace makes the race. Getting right to the meaning of the phrase,  how the race is run when the gates open is usually the most predictable and insightful piece of information a bettor can analyze using the racing form. This is because most horses demonstrate a preferred style of running. At its most basic level, some horses break sharply from the gate, others prefer to hang in the middle of the pack, and some lag far behind the early leaders, hoping to make a late rush in the final stages of the race.

What Running Lines Tell About a Horse Race

A beginning bettor should aspire to learn how to interpret the "running lines" located in all past performances. Generally located next to the speed figures in the past performances, running lines read as a series of numbers that illustrate the placement of a horse in relation to the rest of the field at four different stages of each previous race the horse has run. In the Daily Racing Form for example, a running line might read 4/9 3 3hd 2nk 1hd 1no. In this example, the 4/9 indicates that the horse broke from post four in a field of nine runners. The next number, 3, indicates the horse broke from the gate and quickly found himself in third-place. The next number, 3hd, shows the horse was in third place, just a head (hd) behind the leaders at the quarter mile pole. 2nk indicates that by the half mile point of the race, the horse had moved into second-place, trailing just a neck (nk). Continuing left to right, the 1hd represents the horse found the lead entering the stretch, holding a head (hd) advantage over his closest rival. Logically, the 1no represents the finish, which this horse would have won by a nose (no).

Understanding how to read a running line is a critical first step in the handicapping process as it allows the bettor to imagine the placement of each horse before the race is run.