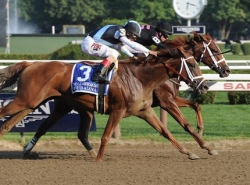 The Coaching Club American Oaks is one of the most important races of the year for three-year-old fillies. The prestigious Grade 1 is held annually as part of Saratoga’s opening weekend and, along with the Acorn Stakes (G1) and the Alabama Stakes (G1), it makes up horse racing’s Triple Tiara. The race was originally held at Belmont Park before switching locales to Saratoga in 2010. The distance has changed several times since the inaugural running in 1917 and is currently contested at a mile and an eighth and offers a purse of $300,000.

There was no shortage of excitement in the 2015 edition of the Coaching Club American Oaks (G1). After a thrilling stretch battle between I’m a Chatterbox and Curalina, I’m a Chatterbox got her nose in front at the wire only to be disqualified for interference in the stretch. The favorite, Curalina, moved up for the win. While the payouts were chalky with a $10.40 exacta and a $31 trifecta, with a racebook like Bovada you can get more bang for your buck with rebates like 3% win-or-loseon all straight wagers and 5% back on exotics.

The field has been set for the 2016 running of the Coaching Club American Oaks and all eyes will be on champion Songbird as she makes her first start on the East Coast and puts her undefeated streak on the line.

Songbird capped off her Eclipse Award winning juvenile season with a win in the Breeders’ Cup Juvenile Fillies (G1) and since then, she has gone four for four as a three-year-old and improved her record to 8-0. After missing the Kentucky Oaks (G1) with a minor illness, she returned triumphantly to win the Summertime Oaks (G2) last time out.

Her main opposition will come from the formidable Carina Mia and trainer Bill Mott. She also missed the Kentucky Oaks (G1) though her absence was due to exclusion not illness and she won a graded stakes race on the undercard emphatically. She was last seen winning the first jewel of the Triple Tiara, the Acorn Stakes (G1).

Here is the field for the 2016 Coaching Club American Oaks along with morning line odds.