Bet on The Iowa Derby 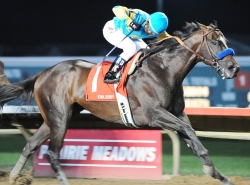 The Iowa Derby was run for the first time in 1986 and since then, the race has developed into a key spot on the schedule for three-year-olds after the Triple Crown. Though the race was originally created as a Kentucky Derby (G1) prep race, it took a six year hiatus following its inception and moved to early summer under the new name, the Heartland Derby in 1996. It returned to being called the Iowa Derby in 1999.

Currently, the race is carded at a mile and a sixteenth on the dirt track at Prairie Meadows. The purse has held steady at $250,000 and the race was upgraded to Grade 3 status in 2010. Some of the top trainers in the country support the race by sending quality horses including Bob Baffert who has won the race three times – with Captain Steve (2000), Concord Point (2010) and Prayer for Relief (2011).

Though champion Hanson delivered as the heavy favorite in 2012, the last three winners of the race have all been upsets. In 2013, Looking Cool pulled the shocker at 17-1 and in 2014, it was Jessica’s Star at nearly 10-1. Last year, Bet on Bourbon delivered at 4-1 while the odds on favorite finished fifth. For horseplayers utilizing an online wagering site like Bovada’s Racebook, they have the opportunity to cash in even more with generous rebates like 3% win-or-lose back on all straight wagers and 5% back on exotics.

A wide open group of eight three-year-old colts and geldings has been established for the 2016 running of the Iowa Derby. There are a wide variety of states represented in the field including Texas, Kansas and Oklahoma to accompany the usual Kentucky-breds.

Texas Chrome has been given the edge as the morning line favorite at odds of 2-1. While he has primarily competed against state-bred competition, the five-time winner got a class test and passed last time out with a competitive third-place finish in the Matt Winn Stakes (G3) at Churchill Downs. He has only been off the board once from nine starts.

Bob Baffert will send out American Freedom to challenge him, the second choice at 5-2 odds on the morning line. At one point thought of as Baffert’s brightest sophomore star, the colt has yet to pan out as a world-class horse but made a good step forward to win the Sir Barton Stakes at Pimlico last time out. They will also be facing Synchrony for Donnie Von Hemel, a well-bred son of Tapit who has been knocking on the door of a breakthrough graded stakes victory.

Here is the field for the 2016 edition of the Iowa Derby along with morning line odds.