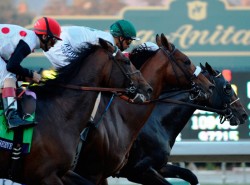 One of the original marquee events of the Breeders' Cup since 1984 this turf race has been run at a distance of 1 1/2 miles since its inception. This Grade 1 race consists of thoroughbreds aged three years and older, with weight-for-age adjustments for horses four years and older.

As a part of the Breeders' Cup series, the BC Turf consistently draws many of the best turf specialists from the European scene, which adds to the already deep talent pool that the Breeders' Cup draws from the U.S. and Canada. In order to qualify, most thoroughbreds must win one of eleven hotly-contested qualifying races, with the remaining spots appointed, setting a high standard for participants. The $3,000,000 purse is another huge draw that brings out the best in the competition. [+]

The only dead heat for any Breeders' Cup race occurred in the 2003 running of the Breeders' Cup Turf. Against odds that favored other entrants, High Chaparral and Johar kicked into high gear in the final stretch, crossing the wire simultaneously. This exciting race was the second BC Turf win for High Chaparral and one of four wins on the day for trainer Richard Mandella, both accomplishments setting new Breeders' Cup records. The only other horse to win this race twice was Conduit in 2008 and 2009. The first Breeders' Cup Turf also featured the longest odds for a winner, with Lashkari taking first despite a line of 53-1.

If favored Telescope had held third in the 2014 Turf, the race would have returned a nice trifecta. When 19-1 Twilight Eclipse kicked past that one in the shadow of the wire to grab the Show money, it turned a nice $1 trifecta into a great one with a payout of more than $250.  Put weekly cash back on top of that, and you see why wagering online with Bovada or another recommended racebook is the smart way to bet.

While all eyes were on European champion Golden Horn in the 2015 Turf, it was instead the Irish-bred Found who stole the show, topping Golden Horn by 1/2 length for a Win payoff of $14.80. He had come into the race after running second in the QUIPCO Champion Stakes at Ascot.