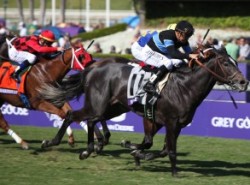 As one of the more recent additions to the Breeders’ Cup lineup, the Breeders’ Cup Turf Sprint is still developing the rich history associated with Thoroughbred racing’s championship event. It began in 2008, twenty-five years after the inaugural Breeders’ Cup event. Since the initial running, the race has developed into a marquee stakes race with an international flair, attracting some of the top horses from around the world. After being run without graded status for the first two years, it became a Grade 2 in 2010 and was upgraded to a prestigious Grade 1 in 2012 with a purse of $1,000,000.

Because the distance varies depending on the track where the Breeders’ Cup is held that year, the race has been run at both five-furlongs and about six and a half furlongs. In 2008, Desert Code established the Turf Sprint as a race with the potential to be both thrilling and full of longshots when he pulled off the upset at 36-1. In doing so, he gave popular veteran rider Richard Migliore the first Breeders’ Cup win of his decorated career. The local horses continued to dominate the race when California Flag delivered in the 2009 edition, proving that the Turf Sprint was one grass race where the United States turf horses could hold their own against the Europeans. [+]

The most remarkable feat in the limited history of the Turf Sprint came in 2012 when the filly, Mizdirection, defeated male rivals with a stunning move from off the pace in her first race off of a five-month layoff. Owned by the popular sports analyst Jim Rome and ridden by Hall of Fame jockey Mike Smith, the gray filly quickly became a fan favorite. The following year, she returned to her home track in California after an unsuccessful trip to the East Coast and won her second Turf Sprint by half a length in a gallant performance, proving that the Turf Sprint had become a must-watch race.

The 2014 Turf Sprint marked the end of a Breeders' Cup Pick-4, and a 7-1 win by Bobby's Kitten over favored No Nay Never produced a $32,000 payout, a number normally seen with big-bomb superfectas. The quality of the Breeders' Cup fields means that good horses will win as longshots, and you only need one on a Pick-4 or Pick-3 ticket through Bovada or one of our other recommended racebooks to be cashing in big.

In one of the bigger payouts of the 2015 BC, Mongolian Saturday took the Turf Sprint at odds of 15-1, to pay $33.80 to Win. He had the advantage of a run on the Keeneland course in his previous start, when he finished second in the (G3) Woodford Stakes as a prep for the Breeders' Cup.