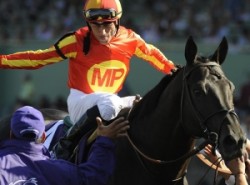 The Breeders' Cup Sprint was established in 1984 as a premiere race for thoroughbreds three years and older at a distance of 6 furlongs on a dirt course. This competition is a Grade I event that every year provides for one of the most exciting of the Breeders' Cup races - a flat-out, go-as-fast-as-you-can duel from gate-to-wire.

The competition each year at the Breeders' Cup Sprint consists of qualified winners and top thoroughbreds deemed worthy of taking part in this event. This process weeds out teams who would chase a huge purse of $1,500,000-$2,000,000 without having a realistic chance at winning. The difficulty of getting into the Breeders' Cup Sprint ensures that every race features the best available competitors, resulting in some of the most exciting sprints in the world. [+]

Midnight Lute is the most dominating presence the Breeders' Cup Sprint has ever witnessed, becoming the only horse to win this sprint in consecutive years during 2007-2008. Not only did Midnight Lute shatter the record time by more than half-a-second by posting 1:07.08 in 2008, but he became one of only 16 horses to win two Breeders' Cup events. The previous record was set by Kona Gold, who avoided a gigantic 31-1 upset by Honest Lady, whose late charge in the 2000 edition created arguably the most exciting finish in the history of this sprint. The oldest horses to win the Breeders' Cup Sprint were Cardmania and Elmhurst, with the former winning in 1993 and the latter finishing first in 1997.

Handicappers who found Work All Week's blazing 1:08.16 six-furlong win, and 1:09 flat Keeneland track record in the form chart coming into the 2014 Sprint were among those cashing tickets when the Illinois-bred won at 20-1. If that $2 was bet online through Bovada or one of our other recommended racebooks, regular cash back promotions would make that payoff even better.

Although controversy among the owner and trainer was to come in the days following the 2015 BC Sprint, there were lots of happy smiles in the winner's circle foloowing the race when Runhappy ran on to a 3/4 length win in the race, paying out $5.20 at odds of 5-2. Prior to the Sprint, Runhappy had won the (G3) Ogden Phoenix Stakes at Keeneland.