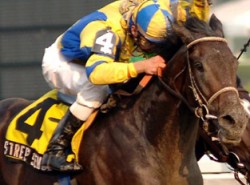 The Breeders' Cup Juvenile has been a hallmark race at the Breeders' Cup World Championships since the spectacular event began in 1984. The showcase for the future stars of the sport is contested at a mile and a sixteenth and offers a lucrative purse of $2,000,000. In the early editions, the race was run at a mile but the distance has increased to further make the race a stepping stone for precocious Kentucky Derby hopefuls. Over the storied 30-year history of the race, the Breeders' Cup Juvenile has yielded some of the most memorable moments and produced some of the sport's brightest stars.

By 1991, the Juvenile had become regarded as one of the pinnacle races on the Breeders' Cup card. Arazi, heralded as the super horse from Europe, came to the United States to take on the country's top two-year-olds with a ton of hype and a lofty $9 million price tag. Making his first start on dirt and breaking from the outside post in the field of 14, the odds seemed stacked against him. After breaking, he dropped to the back of the pack and it appeared hopeless. In a breathtaking move, he began to pick off horses one by one until he pulled away under a strangle hold by his jockey to deliver in one of the most impressive performances before of since. [+]

Despite the long history of promising juvenile winners including Unbridled's Song and the remarkable Horse of the Year Favorite Trick, a trend began to develop known as the "Juvenile Curse". Heading into the 2006 Juvenile, no horse had been able to parlay a win in the Juvenile to a triumph on the first Saturday in May in the Kentucky Derby. When Street Sense turned in a dominant performance in the Breeders' Cup, held that year at Churchill Downs under the Twin Spires, there was a hint of promise that the following year could be the year the curse was broken. He delivered in the Derby in spectacular fashion, forever breaking the "Juvenile Curse".

At better than 13-1, Texas Red produced one of the nicest win payoffs of the 2014 Breeders' Cup, coming from way back to win by open lengths. Finding an upset winner at long odds is the best part of betting on the horses, and thanks to generous bonus offers, the best odds can always be found at an online racebook like Bovada.

Undefeated in four races coming into the 2015 Breeders' Cup Juvenile, future Kentucky Derby champ Nyquist continued his winning ways by taking the race by 1/2 length at odds of 5-1 for a Win payout of $11.40. Prior to the BC he had won the (G1) Frontrunner Stakes at Santa Anita.