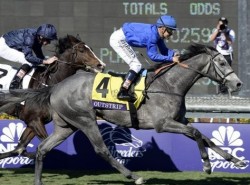 The Breeders’ Cup Juvenile Turf has been a relatively new addition to the already-loaded Breeders’ Cup World Championship lineup. Despite the limited history, the $1,000,000 race has quickly ascended the ranks to become a premier event for two-year-old turf horses. After the inaugural edition in 2007, the race became a Grade 2 in 2009. In 2011, it was recognized with prestigious Grade 1 status. With a seven-figure purse and top graded status on the line, the race has attracted a star-studded, international field and has brought over some of the most promising young turf stars from both North America and Europe.

The debut installment of the Juvenile Turf was not run under ideal circumstances. Held at Monmouth Park in 2007, New Jersey was assaulted with torrential rain and both the main track and turf course took significant amounts of water. That was the first year the Breeders’ Cup offered an advanced program spread over two days, Friday and Saturday, and the Juvenile Turf was part of Friday’s card. Despite the water-soaked turf course, Nownownow took to the surface and rolled to an upset victory at odds of 13-1 under jockey Julian Leparoux, cementing the Juvenile Turf as both an exciting and potentially lucrative race to watch and wager on. [+]

Over the subsequent six years, the European runners would instill their dominance, much like they have with the other turf races on the Breeders’ Cup program. John Gosden and Frankie Detorri teamed up to win back to back editions of the race with Donativum in 2008 and Pounced in 2009. Not to be outdone, the perennial international powerhouse Aiden O’Brien paired up with Ryan Moore to win the 2011 and 2012 installments with Wrote and George Vancouver. In 2013, Outstrip (GB) came over from Europe with a star-studded pedigree and an impressive record. He delivered handily under Mike Smith, carrying the familiar blue colors of Godolphin.

The Juvenile Turf kicked off the 2014 Breeders' Cup World Championships with a nice, even $50 exacta payoff on a $2 bet - not to mention one of the most thrilling stretch drives of the weekend. All our recommended racebooks, like Bovada, give you the chance to pick lucrative exotics such as exactas, trifectas, superfectas and daily doubles.

Euro invaders continued their dominence of the Juvenile Turf in 2015 with Hit It A Bomb, under a brilliant ride from jockey Ryan Moore, came wide from the back of the pack on the final turn and won by a neck at odds of 7-1. He had previously won the Irish Stallion Farms Star Appeal Stakes at Dundalk.