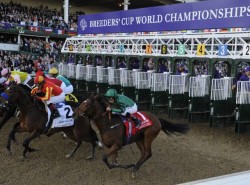 As one of the original Breeders' Cup races since the inception of the championship event in 1984, the Breeders' Cup Juvenile Fillies has forged a long and storied history. Some of the greatest fillies in the sport have stepped into the spotlight and used that race as the exclamation point in remarkable careers. Traditionally run at a mile and a sixteenth, the race began with a purse of $1 million but now boasts a purse of $2 million to go along with the prestigious Grade 1 status. It is the richest race for two-year-old fillies in the world.

The Juvenile Fillies became a must-watch race right out of the gate. In a thrilling and controversial finish, Outstandingly became the inaugural winner via disqualification. In 1989, Go For Wand cruised into the history books and the hearts of the nation with an awe-inspiring cap to her award winning season. My Flag made a different kind of history - she won the race in 1995 and in 2002, her daughter Storm Flag Flying replicated her mother's accomplishment. My Flag herself was the offspring of Breeders' Cup Distaff champion Personal Ensign. [+]

No trainer has had quite the success in the Juvenile Fillies like Hall of Fame conditioner D. Wayne Lukas. He has saddled five winners in the history of the race beginning in 1985 with Twilight Ridge. In 1994, two of the greatest fillies in his career dueled through the stretch, showing heart and professionalism beyond their age. Flanders, carrying the colors of Overbrook Farm, prevailed at the wire over Serena's Song. In defeating her rival, she suffered a career ending injury while Serena's Song went on to a Hall of Fame worthy career. Lukas also sent Open Mind to victory in 1988 as well as Cash Run in 1999 and Folklore in 2005.

As the very first race of Day 2, the 2014 Juvenile Fillies showed why you should never miss a minute of Breeders' Cup action, as the race produced a 62-1 winner, and an astounding $1 superfecta of more than $97,000! While not every race returns that kind of money, our recommended racebooks, including our #1 racebook at Bovada, are the best place to invest when you're handicapping high-priced winners.

The 2015 Breeders’ Cup Juvenile Fillies was the point where superstar filly Songbird burst onto the racing scene, as the heavy favorite won easy, and has not been beaten in seven races since. In her previous start she had won the Chandelier Stakes.