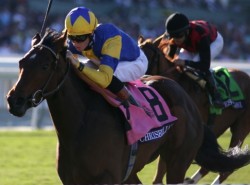 With the emphatic popularity of its counterpart, the Breeders’ Cup Juvenile Turf, in 2007, the decision was made to add a division restricted for fillies in 2008 at Santa Anita and the Breeders’ Cup Juvenile Fillies Turf was born. Right out of the gate, the race attracted a top caliber international field. In 2010, the race was awarded Grade 2 status and by 2012, it had become a prestigious Grade 1 event. Through the “Win and You’re In” program, two-year-old fillies can earn an automatic berth into the race at events held worldwide including Kentucky, England and Canada which has grown the juvenile turf division into an exciting one year-round.

In 2008 at Santa Anita, Maram not only established herself as star on the rise but legitimized the growing reputation of trainer Chad Brown as a force to reckoned with, particularly on the turf. Brown had gone out on his own as a trainer only a year before after learning the trade from Hall of Fame conditioner Robert Frankel. Her road to Breeders’ Cup glory came through Belmont Park after she won the Miss Grillo Stakes, part of the “Breeders’ Cup Challenge” which guaranteed her spot in the race. After Maram’s thrilling victory, the one-mile Juvenile Fillies Turf had become a must-watch race. [+]

Though the history is limited with only six winners since the inception, the race has consistently drawn top, talented competition worldwide and provided fans with exciting finishes and lucrative wagering opportunities. In 2010, More Than Real displayed professionalism and grit beyond her limited career as she handed the highly regarded Winter Memories a rare defeat and gave celebrity chef owner Bobby Flay his first Breeders’ Cup victory. Sent off at odds of 13-1, the chestnut filly also gave Garret Gomez and Todd Pletcher their first of three victories at that year’s Breeders’ Cup World Championships.

Although the favorites finished 1-2-3 in the 2014 Juvenile Fillies Turf, when 72-1 Prize Exhibit just got up for 4th, the superfecta got a big boost and paid more than $2700 on a $1 bet. Knowing that longshots will have an impact is what makes every Breeders' Cup race exciting, and it's even better when you have a wager down through an online racebook like Bovada.

Catch A Glimpse raced just off the lead in the 2015 Juvenile Fillies Turf, and despite having to check at the 7/8ths pole, she took command at the top of the straight and cruised to a 1 3/4 length win at odds of 6-1. Prior to the BC , she had won the (G2) Natalama Stakes at Woodbine.