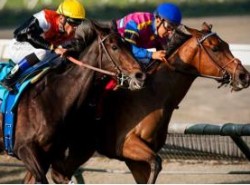 The Breeders' Cup Filly and Mare Turf was added to the already loaded arsenal of championship races in 1999. The race was created as an alternative to the Breeders' Cup Turf to give fillies and mares the opportunity to compete against their own gender. The race has held Grade 1 status since the beginning and the purse was bumped up from $1 million to $2 million beginning in 2005. Depending upon the configuration of the track that is hosting the event, the race is contested at either a mile and a quarter or a mile and three-eighths on the turf. In the fifteen year history of the race, some of the best female turf horses in the world have thrilled the world on one of horse racing’s biggest stages.

Soaring Softly established right from the start that the Filly and Mare Turf was going to be a grass race where the top American turf horses could hold their own. The following year, Frank Stronach’s mare Perfect Sting defeated a quality field en route to being named Champion Female Turf Horse. Hall of Fame trainer Robert Frankel is tied with Ed Dunlop and Sir Michael Stoute with the most wins for a trainer – each conditioner has two wins each. Juddmonte Farms has won three editions of the prestigious race, more than any other owner and all of the wins came with horses Sheikh Khalid Abdullah had bred himself. [+]

The race has traditionally drawn a strong European contingent with some of the best international fillies and mares coming to compete. In 2001, Banks Hill rolled to victory carrying the iconic pink and green silks of Juddmonte Farms. Four years later, her full sister Intercontinental replicated her sister’s remarkable feat. In addition to the two superstar daughters of Broodmare of the Year Hasili, top European mares such as Oujia Board (2004 and 2006), Midday (2009) and Dank (2013) have traveled across the globe to compete and win.

While it will be a bit of a surprise if she makes the trip, South African-bred Inara has made the field by winning the 'Win and You're In' Maine Chance Paddock Farms Stakes in Cape Town way back in January. If she runs, she's certain to be at long odds at one of our recommended online racebooks like Bovada, our first choice for betting Breeders' Cup winners.

As one of the top breeder and owner outfits in the US, Ken and Sarah Ramsey had more disappointments than wins at the Breeders' Cup. But they could count on Stephanie's Kitten, winner of the 2011 BC Juvenile Fillies Turf, who grabbed her second BC win in the 2015 Filly & Mare Turf at odds of 8-1.