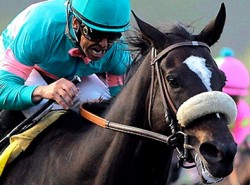 With one of the longest and most storied legacies in Breeders’ Cup history, the Breeders’ Cup Distaff is one of the most anticipated races at the championship event. Since the inception of the Breeders’ Cup in 1984, the Distaff has attracted a star-studded field and given racing fans some of the most memorable moments. It was originally contested at a mile and a quarter, but since 1988 has been run at a mile and an eighth. Beginning in 2008, the race was given feature billing of its own on the Friday Breeders’ Cup card and was no longer in the shadow of the Classic. Since 2005, the prestigious Grade 1 race has offered a purse of $2 million.

Reading through the list of winners of the Distaff is essentially a who’s who of the best contemporary fillies and mares in racing history. Of the early editions, Personal Ensign’s triumphant victory over Kentucky Derby heroine Winning Colors may remain one of the most iconic. Bred and owned by racing stalwart Ogden Phipps, the bay mare was attempting to keep her perfect record intact and at the top of the stretch, it looked hopeless. She rallied resiliently and defeated her fellow champion by a bare nose and retired perfect and undefeated, thirteen for thirteen. [+]

Over the years, the Distaff would showcase some of the highest of highs and the lowest of lows in the sport. After Bayakoa, the Argentinean sensation, thrilled the world in 1989 with her victory, the stage was set for an epic showdown between her and the reigning champion juvenile, Go For Wand, in the 1990 edition. Go For Wand broke down in the final furlong, breaking the hearts of the racing world, as Bayakoa earned a historic second victory. Years later, the Distaff would also play host to some of the most brilliant mares in history like Azeri, Zenyatta and Royal Delta, all ridden by five-time Distaff winning jockey Mike Smith.

Three Win and You're In races in Argentina, New York and Kentucky have produced three mares who have gained an automatic berth in the 2015 Distaff, with Furia Cruzada taking the Gran Premio Criadores in Argentina, Wedding Toast won the Ogden Phipps, and Frivolous on top in the Fleur de Lis. Find the Distaff winner on one of our recommended racebooks, including Bovada, our #1 choice.

Stopchargingmaria emerged from the pack to charge to the lead in the 2015 BC Distaff and then held on to win by a head at odds of 7-1. Prior to the Distaff, she finished 4th by 2 lengths in the (G1) Personal Ensign Stakes at Saratoga.