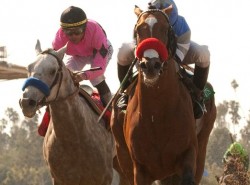 The 2007 Breeders’ Cup at Monmouth Park was memorable for a myriad of reasons. For starters, it was run through torrential rain that left the track and the fans soaked. More important historically, however, was the fact that it marked the first year that the Breeders’ Cup offered an expanded program held over two days. One of the marquee additions to the lineup was the Dirt Mile, a $1,000,000 event designed as an alternative for dirt horses looking to run longer than the six-furlong Sprint or the mile-and-a-quarter Classic. After a stunning debut at Monmouth Park, the Dirt Mile quickly gained Grade 1 status in 2009.

In 2007, over the sloppy main track, Corinthian splashed home to victory in a scintillating performance. The big chestnut colt, a talented but injury plagued individual, came into the Breeders’ Cup with several question marks and left a champion. Under Kent Desormeaux and carrying the colors of Centennial Farm, the well-bred colt took to the off going and rolled to an easy six and a half length victory. The winning photo of him, covered in mud and illuminated almost exclusively by camera flashes due to the darkening skies, remains one of the most iconic in recent Breeders’ Cup history. [+]

In 2013, the Dirt Mile allowed a talented sophomore to find his niche. After early victories in Kentucky Derby prep races, Goldencents seemed like a contender in the Kentucky Derby. The best he could muster was seventeenth and he went on to struggle in the Preakness as well. He returned later in the summer revitalized with a new goal in sight – the Dirt Mile. He proved his mettle against older horses in several top sprint races on the West Coast and went gate to wire in the Breeders’ Cup Dirt Mile after setting blazing early fractions.

By winning 2015 Met Mile, the late running Honor Code is the first horse to gain an automatic berth in the 2015 Dirt Mile. As the field begins to build, get the best bang for your racing buck by picking the Dirt Mile winner through an online racebook, including Bovada, our own top pick for internet wagering.

Rather than face American Pharoah in the 2015 BC Classic, Liam's Map ran here as the heavy favorite and emerged from mid-pack to win by 2 1/2 lengths. Prior to the BC he won the (G1) Woodward Stakes at Saratoga by 4 3/4 lengths.