Bet on The TJ Smith Stakes 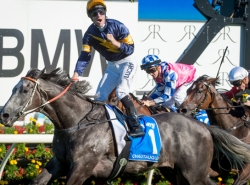 The T.J. Smith Stakes is held anually each fall at Royal Randwick as part of the ATC Championships Series. The race has gradually risen in prominence and currently offers a purse of $2.5 million.  Inaugurated in 1997 as the Endeavor Stakes, the T.J. Smith Stakes quickly assumed its current name in 1999 in honor of the recently deceased Australian trainer Thomas John Smith, who won 33 racing titles in Sydney. The race achieved its Group 1 status in 2005.

Held on the turf at the sprint distance of 1200 meters, the event has attracted many top class runners in recent years, including Black Cavier who won the event in 2011 and 2013 and retired unbeaten in 25 career starts. Other notable winners of the T.J. Smith include Takeover Target (2009), Apache Cat (2008), and Mahogany (1997).

Bet the TJ Smith Stakes and other classic Australian horse races through one of these recommended racebooks.

The 2016 T.J. Smith was marked by another sparkling performance from Chautauqua who become the first back-to-back winner of the race and just the second two-time winner joining the likes of Black Cavier. Unleashing his trademark late run, Chautaugua trailed by ten lengths entering the home stretch, but produced a jaw-dropping last-to-first kick to win by a length and a quarter. The victory secured the talented grey's place as the most elite sprinter in Australia.

Check back closer to race day for the 2017 TJ Smith Stakes contenders!